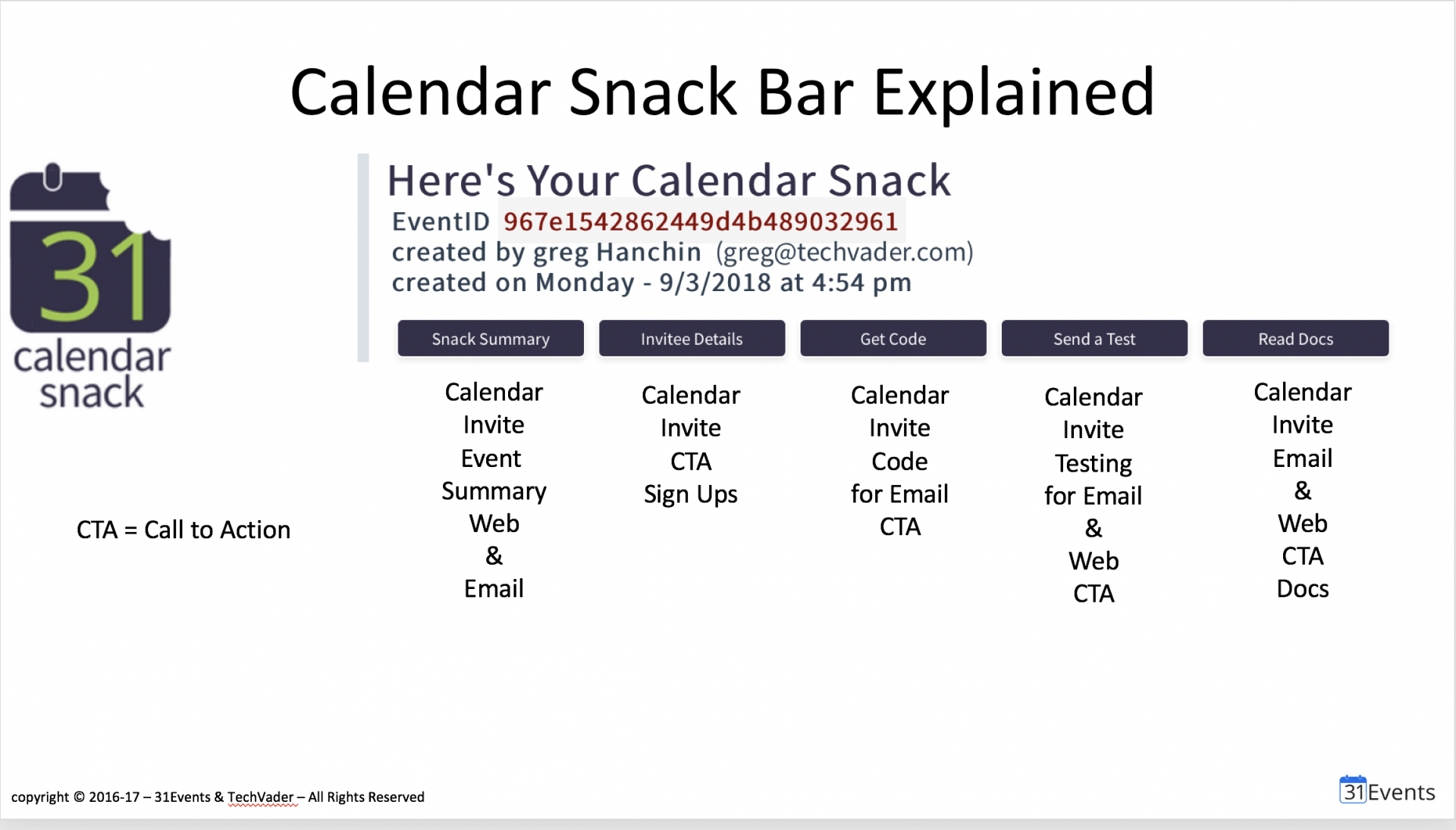 Arnie just added some key fucntionality to the Calendar Snack Detail page.  The active buttons now work from the Calendar Snack reporting page when you add us or “Invite us” to your Calendar event off your personal calendar like Google, Outlook or Apple native calendar.  The buttons are Snack Summary, Invitee Details, Get Code for Email CTA – MailChimp- (Others coming soon), Send a Test to your self Web CTA Form, and Documentation. Arnie has updated the front end now to include an auto generated report URL landing page for the Calendar Snack that is sent with the introduction email when you invite us to your event off your Google Calendar.  Its simple.  Step One – Invite us off your Google Calendar. Step Two – You will receive an auto generated email from our AutoBot (Named Cooper), and the email will have your Calendar Reporting URL in it. Follow the directions and you will be monitoring your event in 30 seconds,   PDF Calendar Snacks. Hi.  We just finished up our PPT Pitch Deck.  I thought I would get it out over the weekend.

We launched just a few days ago and are receiving good feedback.  We are working on the the various embedded Modals for Web page insertion to be auto generated.   We have to figure out the hard stuff first and have been busting down the Calendar Clients into smaller pieces using ERE’s and Lambda’s to help accomplish the complicated tasks of the various clients to use calendar create and calendar consumption persona’s for the various devices.

In addition we did a recap this weekend of our beta release with some You Tube Video’s that can be found on the CalendarSnack.com site here.   This series is focused on how to build out your own Web Form in Word Press and insert the CalendarSnack Event code into a Calendar invitation form for self enabled invitations off any web property to amp up your attendance.  The form allows a customer to send a calendar invite directly to their calendar and we track that for each one off event for the marketeer providing rich detailed big data of the event.

Check out the Videos here:

August 15, 2018 / Greg Hanchin  /  Uncategorized
We have been working with this robot for about 7 years in concept.  I have used it for a couple other ventures for fun and I thought I would bring it back here. It was named after another Cooper we know.  Welcome Cooper the Calendar Robot to the 31 events team. 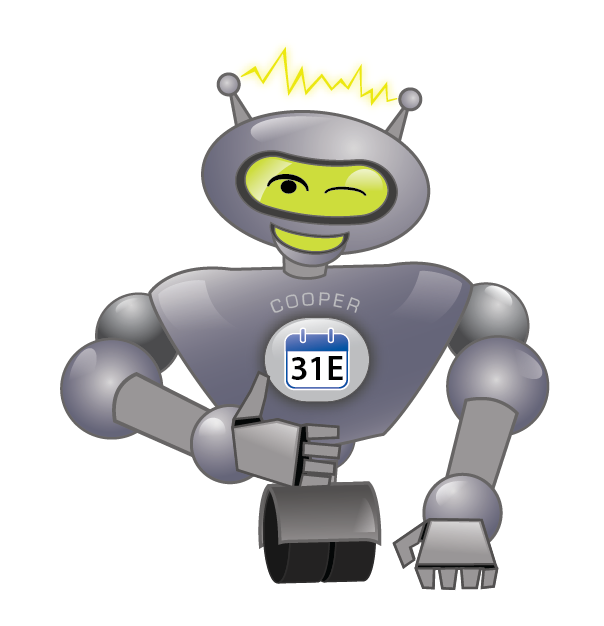 August 9, 2018 / Greg Hanchin  /  Uncategorized
So every marketeer needs their own Calendar server for tracking of calendar invitations for one off events..  Arnie released the quick-start guide with detailed workflow on CalendarSnack.com. The setup is about 8 minutes the first time using your own google calendar client. We are working on Outlook as a calendar creation tool and are close for release in less than 30 days.   If you have questions – please hit the Drift agent on 31events.com and we will get back to you. For more on the detailed documentation please see here. 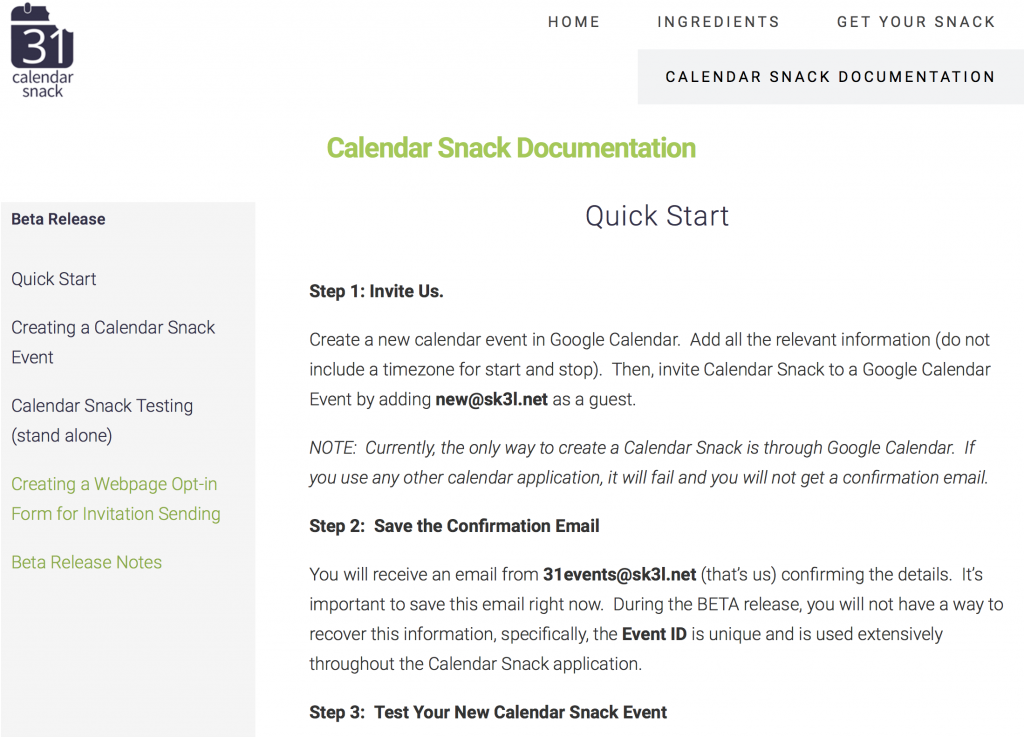 July 31, 2018 / Greg Hanchin  /  Uncategorized
Ok – Arnie developed this for some quick dialog internally and I thought I would share with you.  We have the Google Client for the Calendar working as a creation for events.  We consume the Google Calendar invitation when you send it to our prepared email address – and re construct it (yeah I know – murder you say)  and prepare it for a send based on the Scheduling request in the IETF specification  to make the Calendar Client “POP” in the interface and ask you if your are a Y, N or a Maybe for the Web embedded form off your website .  See below of the support list for beta. We track all of this on the back with our Calendar Reporting engine.  Note this address in the Calendar Snack page will be updated on August 10th or before with the correct live address.

Hello – I thought I would get out a quick post and give you and update as of July 15.  We completed numerous hurdles this weekend. We have cemented some repeatable install approaches that take less then 5 minutes to get rich reporting working for your calendar invite.  See here to download the preview calendarsnack.com debrief. We will be be launching soon! 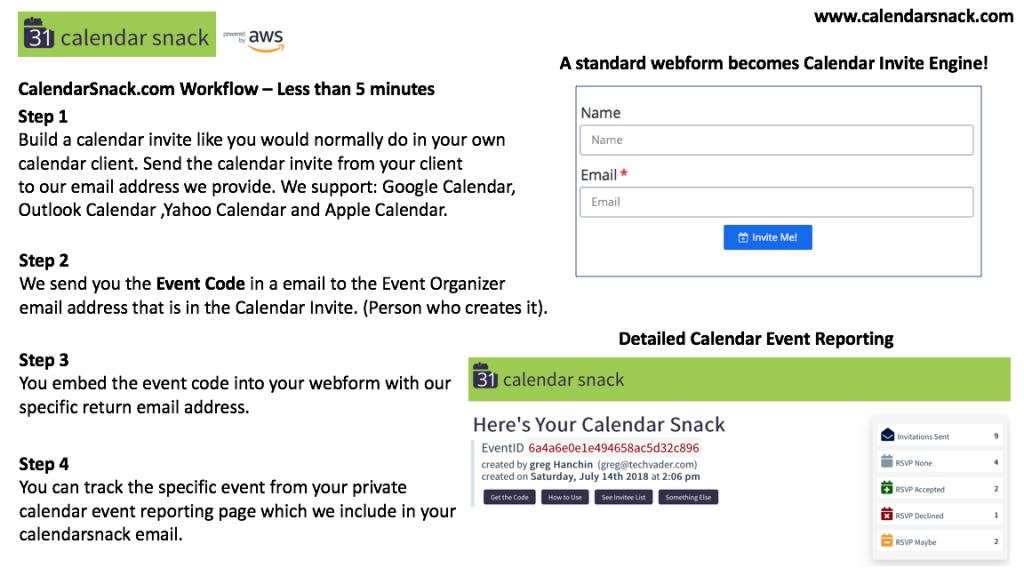 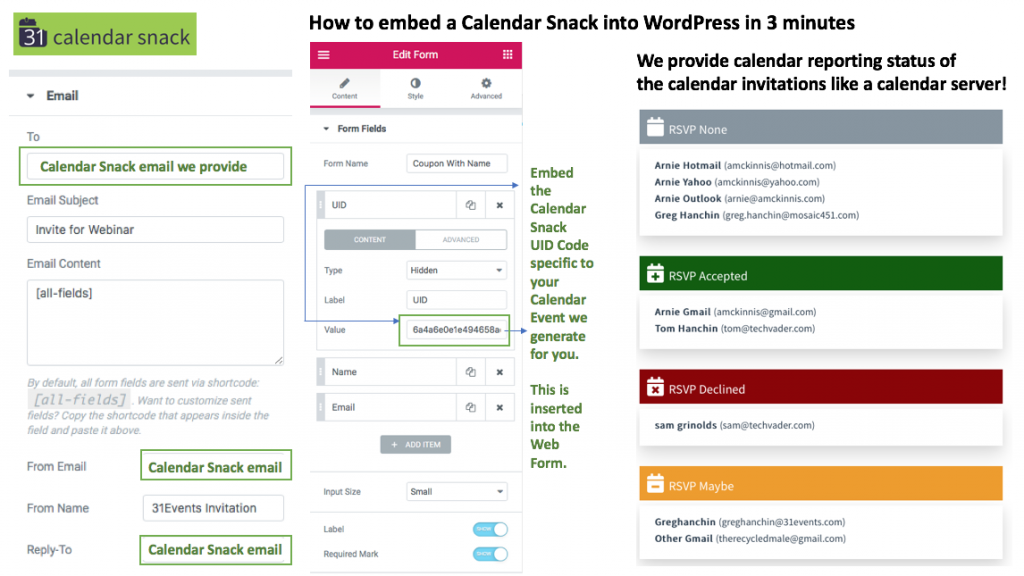 Calendar Invites at scale on AWS

So I started off my ISV journey 7 years ago.  Just an innocent attempt to get people to my events by sending them a Calendar Invite.  If they accepted, I knew that they were coming.  Or at least had a better chance of showing up to my events.  Along the way I had a Web based Calendar engine built by a local contractor on an old Cold Fusion stack.  It worked and we were off on many use cases on how I thought it should work.  Some 2200 hours of personal time in testing, UI design, and disastrous blunders on my part as a weekend and after work project I needed break.  If this was going to be bigger idea I needed help.  Enter a friend named Arnie.  Arnie came into the calendar “Thunder Dome” 2.5  years ago.  Or about 1800 hrs ago.  It has been a part time project for him and he caught the bug as indicated that those hours are after work and weekends.

He helped with so many things –  testing , coding , web site, blogging and overall front end animal.  I voted him to Co-Founder last year.  He is a true inspiration.  Then we decided to blow up the old site and start over -literally scrap all the code some – $80K in custom contract coding down the drain..  Not easy.  We were both at a loss for 60 days.  We knew after talking with several large test customers we needed to get to scale on AWS with SES.

We then started our Pizza Journey into AWS in August 0f 2017.  About 3 months ago in February of 2018 we were fortunate to recruit Jonn , who is our lead developer and CTO.  We have been iterating using Slack, and brain storming on how to use SES, Python SDK, SNS, Lambda and Arnie’s Vue front end with his run time engine.  We have the prototype running now in AWS.  Pretty exciting to see the Pizza project running!  The test site will be up and running in a few weeks. www.calendarsnack.com. More to come as we attempt to give every marketeer in the world their own calendar server for sending and tracking of Calendar invites!